Industrial interest in diterpenoids stems from equally broad applications such as renewable feedstocks, inks, tackifiers, flavors and nutraceuticals, fragrances, and on the far end of the value-spectrum, therapeutics. However, access to these biomaterials is limited by the native sources, where they often accumulate as part of complex mixtures of related but undesired compounds, or because formal (petro)-chemical synthesis is an economic and environmental challenge.

This study driven by postdoc Aparajita Banerjee and MSc student Jonathan Arnesen, members of the Hamberger team (Department of Biochemistry and Molecular Biology, MSU) investigated the installation of modern pathways to higher plant specialized metabolites, diterpenes, in the ancient land plant lineage, the moss Physcomitrella. From biotechnological perspective Physcomitrella is an intriguing system, as the lineage is 450 MY old and evolution of even simple terpenes, such as the ubiquitous phytohormones Gibberellic acid, has not happened yet. Also, like in yeast, or mice, genome editing is conveniently done by homologous recombination, which is not feasible in any other plant. 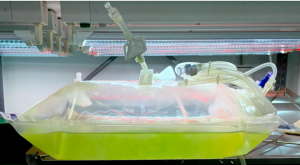 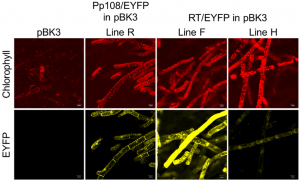 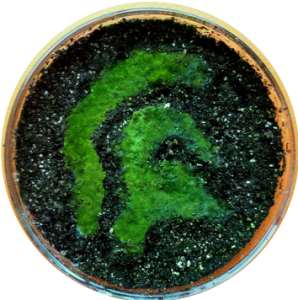 From left to right:

These features prompted the team to develop a modular plug & play system to equip Physcomitrella in stably transformed lines with several pathways to modern terpenes by targeted genome engineering. These now accumulate modern land plant diterpenes. And just because it was hypothetically possible, Banerjee and Arnesen went a step further, targeting highly abundant long-terminal retro-transposons, considered “selfish” copy-and-paste DNA elements making up about half of the Physcomitrella genome, and also common in higher plants. While the fluorescent marker landed right in the retroelement locus, the far more advanced terpene pathways revealed that this new system is more complex and will need more work than initially anticipated.